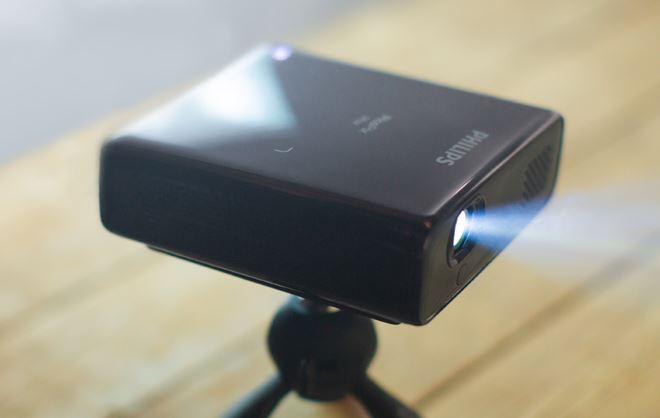 The Picopix Max is a Full HD DLP projector capable of producing up to a 120’ image, with built in speakers, and up to a 3-hour battery life.

Along with its portability and versatility, the PicoPix Max stands out as a fully self-contained entertainment unit with: a built-in media player, Android OS app support, Wi-Fi screen mirroring, and HDMI, Micro SD, USB, and USB Type-C connection ports.

Philips markets the PicoPix Max primarily as an entertainment machine, but its variety of features also makes it a powerful tool for professional use in office and field environments.

With an MSRP of $899, the Max is the most powerful  of the Philips PicoPix line of projectors that also includes the PicoPix Micro, and the PicoPix Nano. 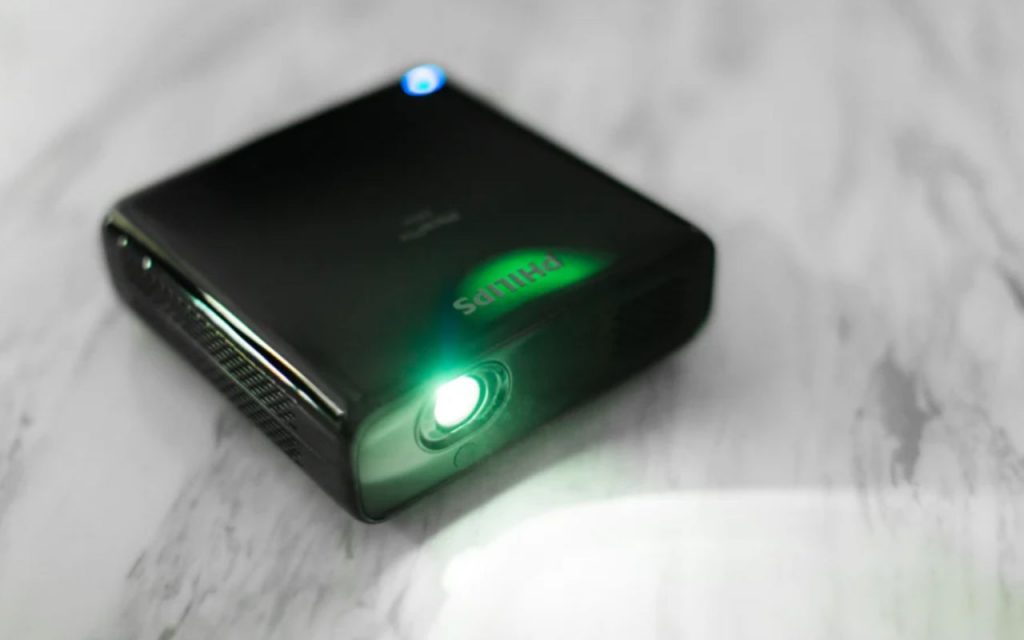 That’s a pretty compact design, though the thickness means it might be an exaggeration to call this thing pocket-sized. Like most electronics, it was made in China.

For controlling the unit, the built-in track-pad makes things pretty intuitive. Because the track-pad works basically like touching your phone, and has a surface area that compares favorably with most smartphones

But using this design also means you might want to throw this projector into the included protective pouch before you start hauling it around, in order to protect the pad. 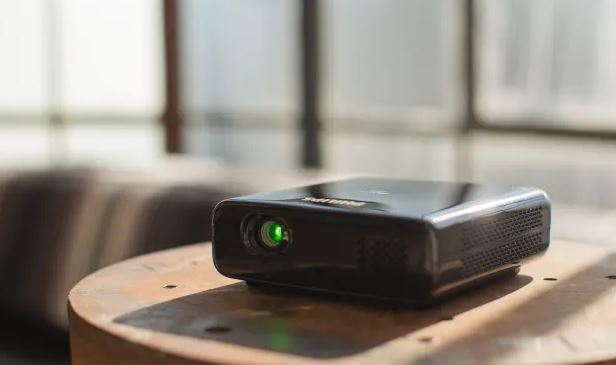 Turning to its visual capabilities, the Max provides a fairly respectable native 1080p presentation. That allows it to stretch out towards 120″ for its maximum screen size

And looking to aspect ratio, you can move between standard 16:9 and 4:3. You won’t find any robust widescreen support, but that’s somewhat to be expected for a projector like this one.

As you start to scale towards 120″, you’ll find it starts to look more and more like you’re watching 480p. To its credit, the TI DLP Engine does a great job of keeping colors look rich. 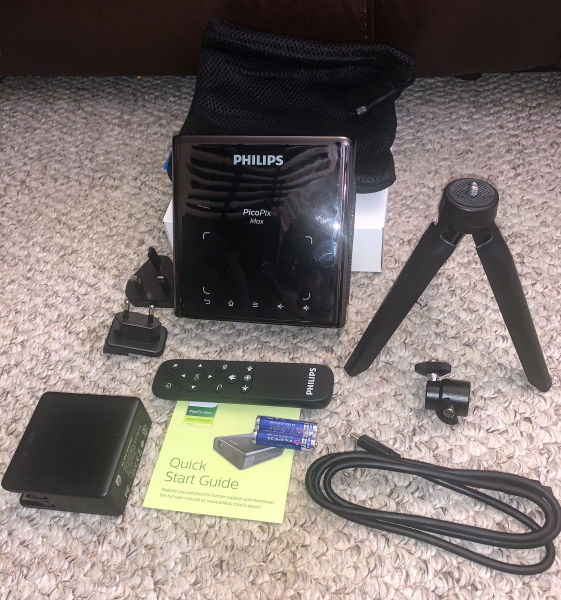 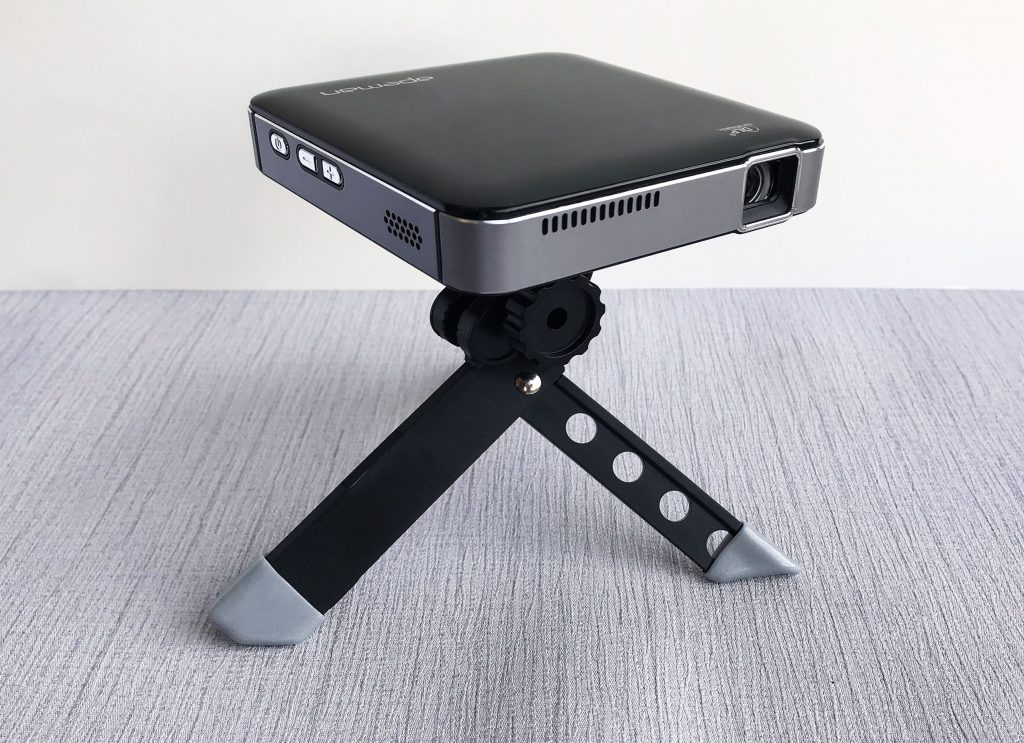 Outside of all the standard stuff, there’s actually several features that help make this projector stand out a little more than its competition.

For instance, there’s automatic keystone correction feature. That way, the screen will angle itself to perfection without you needing to do it yourself.

Likewise, four corner correction allows you to adjust the aspect ratio for a perfectly straight image in a matter of seconds.

And the lens supports a rapid auto-focus, so you’re left doing almost no micromanagement of the settings yourself. 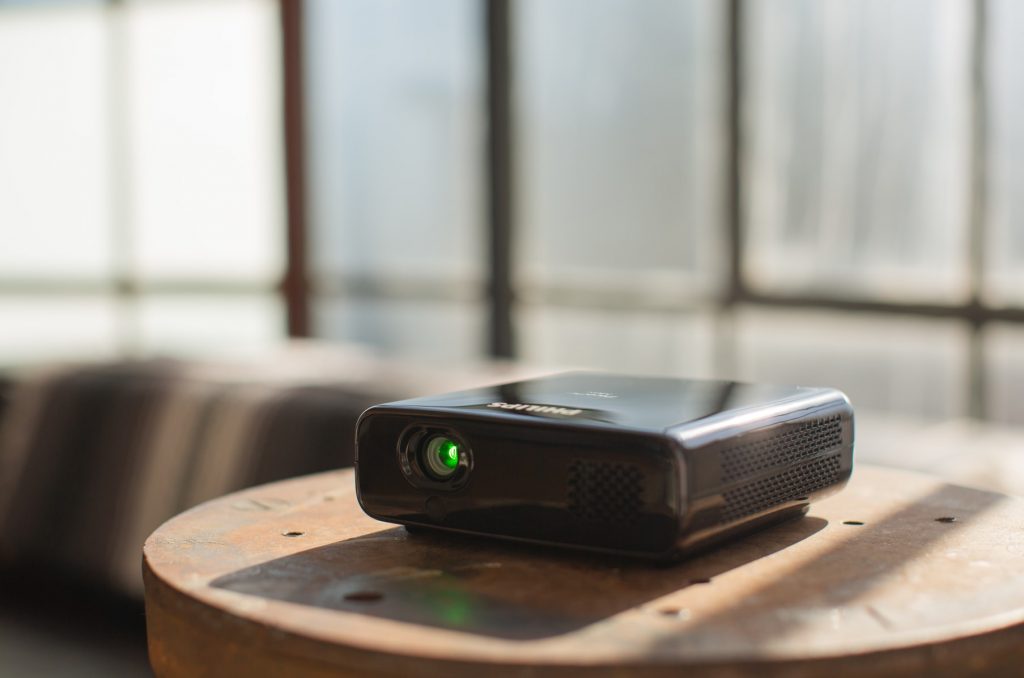 The internal battery is a pretty respectable 16,500mAh. That’s large enough for it to double as a power bank, allowing you to recharge your smartphone and other devices as needed. Pretty handy.

Though of course doing so will end up tapping out the projector pretty hard in a relatively short amount of time.

With those cells fully prepared, the battery is supposed to last a maximum of 3-hours. Does it get you there? Well, that partially depends on what you’re playing.

It also partially depends on the brightness settings. If you’re cranking out bright whites constantly, that can start running you down closer to the 2-hour mark.

By contrast, running with the brightness tuned down just a bit can start pushing things in the other direction.

Is Philips PicoPix Max Worth Using?

The Philips PicoPix Max is surprisingly well rounded. Looking to its wireless connections, the PicoPix is able to accommodate both Bluetooth and standard Wi-Fi connections.

ExpressVPN is pre-loaded for security, and you can also just do everything through USB-C alone, making setup very simple.

If you were willing to go one step closer to full-sized, you could get a similarly powerful projector like the RAGU Z498 Mini Projector for much less money.

That means size is one of the most important elements of the PicoPix Max, and taking advantage of its portability is essential for this to be a good value.

Though many of the advantages of going bigger, for people who want something more portable, the PicoPix Max ought to hold up pretty well. 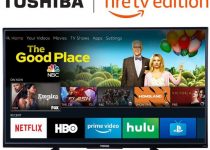 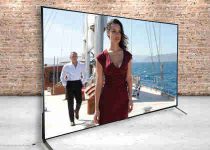