The Intercooler Stand for Nintendo Switch from Nyko is designed to keep your system well ventilated and prevent it from getting too hot. It attaches to the dock and is powered via USB. Users can then position the stand vertically or horizontally to best suit their preference.

As the name suggests, the ‘Intercooler’ has been designed with the intention of helping the Switch expel heat. It comes armed with a large air vent and even proximity sensors to determine when is the best time to engage the fans.

All of that sounds well and dandy, but in reality, it really doesn’t mean much, if anything.

The Switch, like every other electronic device, can get pretty hot. But, it was already designed with specific cooling techniques and protocols in mind.

You’ve likely heard it in action if you’ve played any particularly taxing games like Cities: Skylines. Even when stressed,  your Switch will most likely not succumb to overheating (unless in particularly extreme conditions).

In the event that does happen, it’s designed to shut itself off before any serious damage occurs to the components. Thus, Nyko’s Intercooler is basically worthlesssomething.

The top of the grip has a slotted circular fan centered in the middle with the Nyko logo above it.

Angled on either side are two slots for air to travel out of the grip towards your thumbs. Flipping the grip over, another similar pair of slots are located on the bottom to direct air towards the rest of your hands.

The micro-USB charging port and an on/off switch are located on the front of the controller, while the back is contoured to the shape of the Xbox One controller and has two prongs and a tiny clip.

Ease of Use & Installation 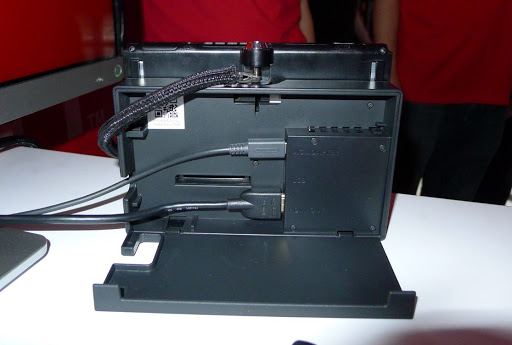 Another smart thing Nyko did with the Intercooler. Its fan is fully automated, making use of built-in thermometers to ensure it triggers spinning only as necessary.

In other words, the fan can do its thing without any micromanagement. You can finish playing and walk out of the room, and you don’t have to worry about whether or not you need to turn off or adjust the fan.

Installing the Nyko Intercooler on your docking station takes about three minutes.

The plastic chassis simply snaps onto the side of the docking station, allowing the combined unit to be positioned upright or flat.

For the next step of installation, you need to connect the USB to power. That’s a bit easier to manage with the swivel clips positioned along the edge of the chassis, helping keep the USB wire in place.

And that’s pretty much it. After setup, you’ll notice the design of the Intercooler doesn’t obstruct the Nintendo Switch’s use of HDMI or power cables. 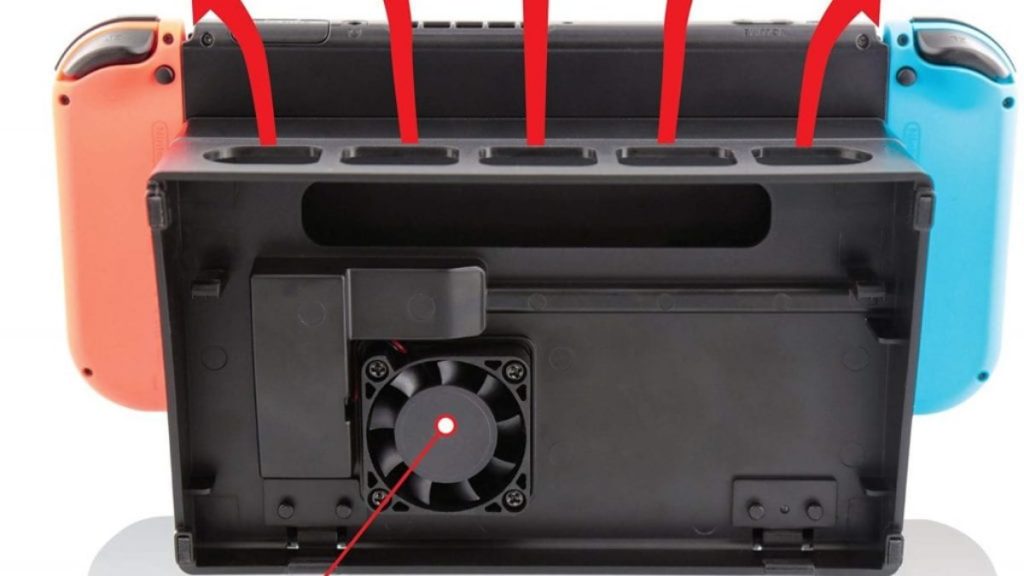 It’s hard to get excellent cooling within consoles precisely because they’re relatively compact. And the Nintendo Switch is compact among compact devices.

Even with a cooling solution like the Nyko Intercooler, you’re unlikely to ever achieve truly cool temperatures on par with desktop PCs.

But the Nyko Intercooler is capable of generating considerably swings in temperature. In the right circumstances, you could expect to see a 20-degree improvement.

Those circumstances might include higher ambient room temperature, and weak airflow available to the Switch. 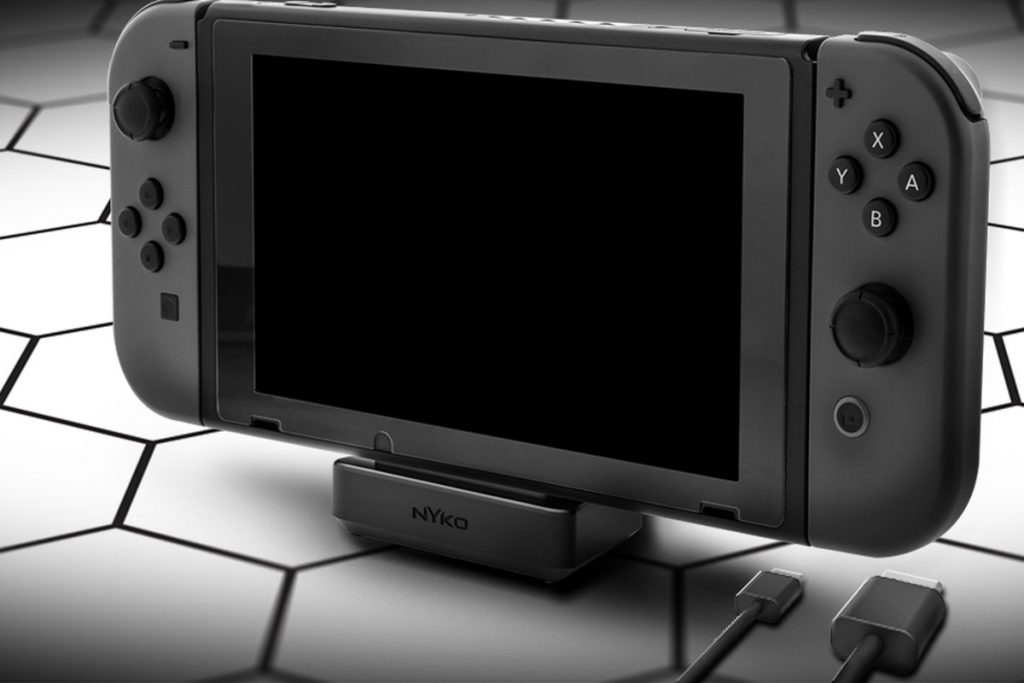 When in use and turned on, the Nyko Intercooler Grip does indeed act like air conditioning for your hands.

The airflow directed towards your thumbs and hands is quite strong. To be honest, it would have been nice to see a low and a high setting to help further control the amount of airflow.

As it stands, it definitely does work and keeps your hands cool and the sweat away, but you’re probably only going to want to use it in short bursts instead of having it constantly on.

The grip is also fairly loud when the fan is on, which can be annoying at times if you’re not using headphones or playing with the volume on your TV or sound system down low. 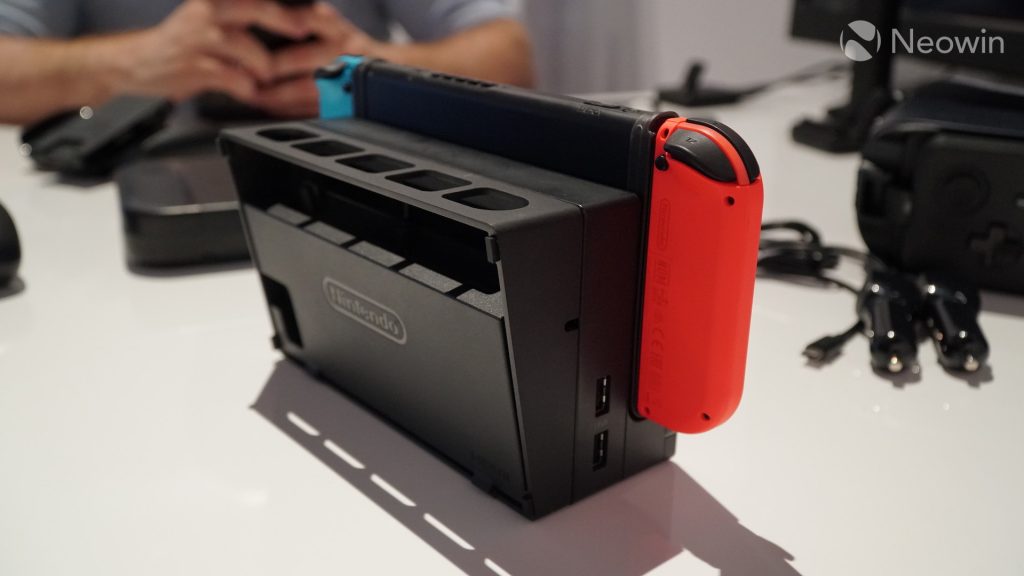 The Nyko Intercooler Grip lasts just under an hour when fully charged. While this doesn’t seem like that long  after all, gaming sessions can last for hours  as mentioned above you likely won’t have it running constantly so it should last for a few hours while gaming.

A low/high toggle would also help in extending battery life.

Because of the design of the grip, it doesn’t pull battery power from the controller when it’s dead but you do have the option to use it while it is plugged in.

Recharging the Intercooler Grip was an entirely different story. When plugged in, an LED light turns on to indicate it is plugged in and charging.

Unfortunately, this light doesn’t seem to go off to indicate that the grip is recharged. Even when left attached to a charging cable for an entire day, the LED remained on. 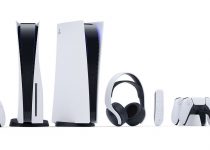 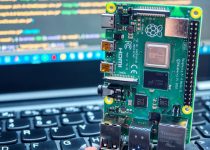 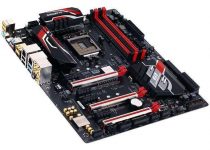